Zegram Ghart is a 26 year old hunter Hunter who joined forces with the Dorgengoa Pirates long before Jaster came aboard with them. He's not an official member of the Dorgengoa Pirates, even though he seems to be the most pirate-like of the lot. He's one of the many elite hunters that the captain is hiring on, presumably to tackle some enormous and hugely profitable challenge. However, that's not to imply that his loyalty was ever part of the contract...

As befits a mercenary, Zegram is aloof and diffident and offers no clues as to his past (though a late-game cutscene reveals his home planet to be Zerard). He doesn't think much of the kindly Dorgengoa Pirates and thinks even less of the greenhorn Jaster when he meets him. He prides himself on being a friendless 'Lone Wolf' devoid of any particular allegiances, seeming only to care about turning a profit at the end of a long day despite showing a certain sense of humor on occasion. It's anyone's guess as to how Zegram manages to stay with the friendliest pirate crew in space - perhaps his affinity for Pirate's Grog and the fact that the bar in the Dorgenark's gallery stocks it makes it a little bit easier for him.

Zegram has a large tiger stripe tattoo across his chest and a scar across his face. He has long, brown hair and a red eye patch across his right eye. He has two earrings as well as a variety of necklaces and rings. Zegram's outfit is customizable just like it is with the other 7 playable characters in the game; most bear similarity to a Swordsman's Gi, which makes sense given that his weapons consist of large single-edged Broadsword and Shuriken that are dispensed from a dispenser on his belt. Some fans remark that he looks similar to a cross between Auron from Final Fantasy X, Xiahou Dun from Dynasty Warriors series, and Jack Sparrow from Pirates of the Carribean and even bears a slight resemblance to Solid Snake from the Metal Gear Solid series.

Zegram uses various single-edged Broadsword at close-range. Due to his fighting style, he is a little slower in comparison to Jaster, requiring greater technique to use efficiently. Zegram also uses Shuriken in addition to his sword, and can use about 75 per battle.

It is revealed through cutscenes early in the game that Zegram is only being paid for his services on the Dorgenark, not his loyalty: he abandons Jaster and Kisala before the fight at the Star God's Altar on Juraika and despite returning with a canister of Booster Oil made from Fire Fruit, it is also shown that he was talking with a third party. Zegram is later shown to be in the service of Valkog's regime in their attempt to unlock the gate to Eden when they got word of Dorgengoa's bid to find out its secrets. However, this is once again an example of how he was being paid for his services, not his loyalty: after defeating Seed at the Great Tablet, he betrays Valkog and company, knowing their promises to be empty. The true Zegram was once a kinder, more caring man until his fiance Jane was killed by a Brutish Hawk while trying to save an old man. Knowing his skill as a Hunter, it was at this vulnerable moment of his life that Valkog and his associates approached him with a proposition: They would find a way to bring her back in exchange for his services. It was an offer that Zegram couldn't bear to refuse. It is revealed after the aforementioned fight at the Great Tablet that Zegram had doubted the sincerity of Valkog and associates ever since his visit to the Rosencaster Prison, where he had seen human bodies being transformed into mindless monsters through exposure to Rune. This was not the resurrection Zegram had imagined for his love; on top of the ethical implications of reviving the dead, he saw that they probably had never had any intentions of bringing her back to life in the first place. Despite being mistrustful of Zegram from that point on, Dorgengoa allows him to remain a part of the crew after a little convincing from Jaster and Kisala. It is toward the end of the game that Zegram rebuilds his connection to his inner feelings and acquires the Drigellum of Love for allowing himself to feel his loss of Jane and let her go, thereby enabling himself to move on with his life. 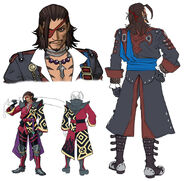 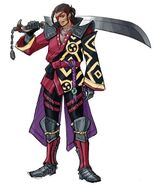 Zegram in one of his unlockable outfits