Lilika Rhyza hails from the remote and primitive Burkaqua Tribe that lives on the jungle planet Juraika. She is head of the Burkaqua Warriors and champion of her people, a venerable title that she gained under motivation from a traumatic incident in her past...

Lilika is in line to succeed as Village Chief when the time comes and it isn't hard to see why: She's a superb warrior, a canny tactician and a natural leader. Although her talk about spirits might lead her companions to think of her as excessively religious or superstitious, for Lilika that sort of thing is just a part of her upbringing and she is nothing if not matter-of-fact. If her companions try to keep a secret from her or lie to her, she will see right through them immediately and she will not be very content.

Lilika is a strong, young warrior. She will risk her very life for her people and is very trustworthy. She is not religious, but she does follow the ways of the ancient Burkaquans strictly. She is a natural leader and she is also very persuasive... using threats, that is. It wasn't always like this, however. Her motivation to be such a powerful warrior stems from an incident in her childhood that led to her mother's death and her sister Miri losing her eyesight.

Lilika is a young woman with light brown skin. She has long violet hair, but keeps most of it tucked away in her tribal headdress. She wears light clothing that, like the other main characters' outfits, is changeable. She always carries a Bow and a Hatchet with her, though.

Unlike the other main characters, Lilika's weapon system is switched. Her main weapon is a long-range Bow with a limited number of arrows available in each battle. Her secondary weapon is a Hatchet that can be used indefinitely.

Long before the events of the story, Lilika, her younger sister Miri and their mother, Amni, had been out in the Jungle picking fruit when they were attacked by the Individer.
In the attack, their mother was killed by the beast. Lilika was knocked away from her sister, whom the beast had laid eyes upon next. In Lilika's memory, she fought valiantly against the beast... but her blows came to naught. It almost seemed as if, for all the good it was doing, she was striking at water. The beast attacked Miri and took her eyesight. Years later, when Miri is to be sacrificed to the "Star God" in order to halt the spread of the Dark Fruit, the beast appears again. This time, Lilika defeated the Individer with the help of Jaster, Kisala and the Freeze Shot, which hardened the beast's liquid-like skin into a damageable form. Near the end of the story, it is revealed that Lilika did not fight the beast as she remembered: instead, when her sister called to her, she froze in panic. Seeing her sister being mauled by the beast, she could not bear to live with the memory that she had sat by and done nothing to save Miri from the beast. As such, she fabricated her memories so that she would think she fought it, just to keep the guilt away. When confronted with the truth, however, she breaks down. It is then that her mother appears before her and helps her to find the courage to face the truth and move on with her life, granting Lilika the Drigellum of Courage when she does so. 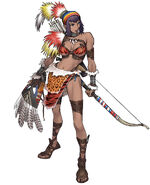 Lilika in her Star Travelers Outfit