Jupis Tooki McGanel was once a researcher for the Daytron Corporation before the events of the story began. Considered brilliant by his peers, he worked day and night on his projects with his assistant Tony, particularly his last project involving the use of Time/Space energy that could solve the galaxy's energy problems. That is, until things took a turn for the worse...

Jupis tends to be somewhat arrogant and presumptuous, as well as a little impatient. He also shows flashes of insanity. However, he is also a genius, especially when it comes to technology. He also has somewhat of a temper, though this is mostly due to his addiction to coffee and his lack of sleep because of it. Despite caring about his projects a great deal, he also values people such as Tony, his former lab assistant. His home planet seems to be Zerard, as he remarks before leaving with the crew of the Dorgenark that the police have his house staked out.

Jupis is a blue-skinned, long-necked lizardlike creature known as a Granshee. His skinny limbs contrast with a somewhat rotund torso and his long arms also contrast with his somewhat short legs. His outfit is customizable, just as it is with every other player character, but he always carries a Spear and a Weapon Box.

Jupis carries a Spear and a Weapon Box, the latter dispensing various articles (such as miniature kamikaze UFOs) on command. As with most weapons, there are many kinds of both and the Weapon Boxes, being subweapons, can only be used a few times per battle.

During the time/space project, Jupis worked continuously for an entire week thanks to his addiction to Coffee keeping him up. However, the tiredness still took its toll on his mind, causing him to overlook a fatal flaw. As Jupis finally stopped to rest, Tony spilled Jupis' coffee all over the keyboard, causing the entire mainframe to crash. Jupis took out all of his sleep-deprived wrath on Tony, subsequently firing him. The bad Karma drawn by his actions got Jupis fired from Daytron soon after, causing him to go slightly insane and hijack the Daytron Starship Factory where he was previously employed as an act of revenge. It is about at this point that Jaster and company have escaped from Rosencaster Prison and are trying to get their Intergalactic Travel Visa renewed at the Galaxy Corporation headquarters. With the mainframe under Jupis' control, no Visas can be renewed, much to the party's dismay, until MIO suggests that the party go after Jupis themselves. Later in the story, as Jupis and the rest of the party each work to gain their individual Drigellums, Jupis is forced to come to terms with his pride, which caused him to (along with the mental impairment due to sleep deprivation) overlook the fatal flaw in his Time/Space Technology research. Tony had warned Jupis about it, but Jupis had paid no mind. Hundreds if not Thousands of Zerardian citizens would have died had their project been tested with the flaw in it, so Tony took drastic action, sabotaging the project in order to save those citizens and consequently getting fired by an enraged and mentally/emotionally unstable Jupis. During this sequence, Jupis and Tony reconcile and Jupis gains the Drigellum of Pride. 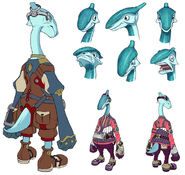 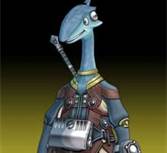