Henry is a lower class prison guard. Along with Robert he is seen numerous times during some cutseens doing trivial activities. He is a very enthusiastic MIO fan. 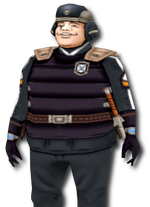 HENRY JR.: Narcissus Beetle (King)
ANGEL MIO: Butterflap
MIOTHRA: Flappillon
HONEY MIO: Lovely Honey
SWEET MIO: Honeybee
From prior experience you should know that flying Insectors usually charge forward to assault your King. Start with a good lineup to avoid being in a bad situation right at the start. Lovely Honey and Honeybee can poison your Insectors and that's not a good thing. You would want to take out these two first followed by the other two flying Insectors. Lastly, finish the king before it uses it's Crushing Horn.