Mizel Rogue, better known as Desert Claw is a legendary bounty hunter and owner of one of the Seven Star Swords, the Desert Seeker.

Desert Claw is introduced early in the story as a famous bounty hunter and the person that Dorgengoa sent Simon and Steve to look for.

The first time he appears, he helps Jaster Rogue against some beasts and gives him the Desert Seeker that starts off Jaster's epic adventure as a member of Dorgengoa's Crew.

He later comes in to help the group fend off Seed during the trek through the Libra King's towers in Zerard.

Later in the Game Desert Claw reveals his true identity as Mizel Rogue, the father of Jaster. He explains how he met Johanna, Jaster's Mother, in Johannasburg and the two fell in love. However, after giving birth to Jaster, Johanna died from a disease, and Mizel left Jaster with his old friend Raul in order for Jaster to find his own destiny. Mizel knew that Jaster would be the one to bring peace to the galaxy and save it. He tells him to continue to Eden to find the way to save the galaxy. 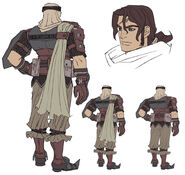 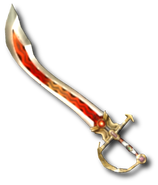 The Desert Seeker, the sword of Desert Claw soon be passed to Jaster Rogue
Community content is available under CC-BY-SA unless otherwise noted.
Advertisement